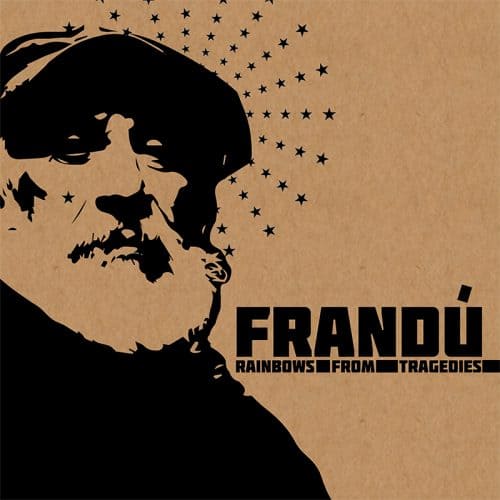 I first met Frandú at the Tip Top open mic about a year and a half ago while visiting Madison. He’s a little ball of bright-hot energy bouncing around between the sky and the earth at the speed of light, a powerful presence in a small package that one can’t quite seem to hold onto, as he hops from leg to nimble leg with the grace of a dancer. His attention feels both intensely focused and pushing outward, attaching to the trees, flowers, passersby. He, himself, seems bigger than life. His fluffy white beard seems bigger than the rest of him combined. He’s adorably flirtatious. He took the stage after our frenetic conversation on the sidewalk (twenty minutes, during which time he’d thoroughly endeared himself to me), and began to speak. His thick Colombian accent and resonant voice captured my attention. His irreverence toward death, his obvious love for life, the hard belly laughs he delivered in the midst of an existential rant had me hooked. His voice rose in volume as he tried to make himself heard over the rude, raucous drunk patrons in the back of the bar. I nearly jumped out of my skin when he stopped, mid-sentence, and yelled into the microphone, “LISTEN TO ME! SHUT THE F*K UP! FRICKEN FRACK!” After a few seconds of admonitions and trading insults with the loud mouths, the bar quieted; he continued as if nothing had happened. I bit my cheeks to stifle the hysterical laughter. It was not the last time I would witness Frandú make demands to be heard. As he will openly tell anyone, Frandú is dying. He has no fucks to give about what anyone has to say about him, but has much to say and less time than most to say it. Every word is essential, loaded.

When Nate and Ryan told me they were signing Frandú to the label for a spoken word album, I was pleased, on one hand. Cool thing to do something different, to make a spoken word recording. Cool thing to represent this artist, whose voice is fully deserving of being amplified as much as our little label can. Obviously, Frandú the Man, the Legend, is someone I’d like to support and enjoy seeing in the flesh. I support this.

On the other hand, I thought to myself, spoken word is tricky. How do you make an album compelling when you don’t have that charismatic little ball of light bouncing in front of your face, screaming, ranting, dipping into carnal, deep growls with that smooth voice. Can you truly capture the essence of a person’s live performance in an audio recording done in the studio? And for those of you who think, erroneously, as I once did, that maybe poetry/spoken word is “not necessarily your thing,” for the love of god, shut the f*k up and listen to me. Better yet: listen to Frandú.

I was not present for the recording of Frandú’s album. Periodic dispatches from Snoozefest Studios let me know the recording process was going well. I waited. The deadline for Andrew C.’s album, which was supposed to be our first release, came and went, as scheduling conflicts (spoiler: we all still have day jobs) with the musician delayed the production process. I got snippets from the manfolk that Frandú’s album was coming along quickly and well, nearly done. That musicians were playing some beautiful interpretive music behind a couple of the tracks, and they couldn’t wait for me to hear it. The word came: Frandú: Rainbows from Tragedies would be ready before Andrew C. It would be our first release as a label.

I wasn’t precisely concerned or disappointed. Maybe my first instinct was to wish that we’d released music first, and then other types of performance. And then I heard the album.

I’m not going to spoil it for you, but I have to tell you this: You need this album. The narrative Nate and Ryan have constructed from live performances, interviews with Frandú about his life, as well as the straightforward spoken word studio performances, is gripping. That rich voice, the powerful presence, the sporadic laughter at himself, at the world, that peppers the tracks — it all comes through more beautifully than I ever could have imagined. It is a treasure, an affirmation of life, genuine joy to hear. It is a casual study of death and mortality.  It is overwhelmingly wonderful. And I am so, so grateful that it accidentally became our debut release.

Check out the event for Frandu’s album release THIS WEEKEND (May 11-13) here.

And sign up for “Friends with Benefits” monthly newsletter, and we’ll let you know when the album is formally released for download or hard-copy purchase on bandcamp here.